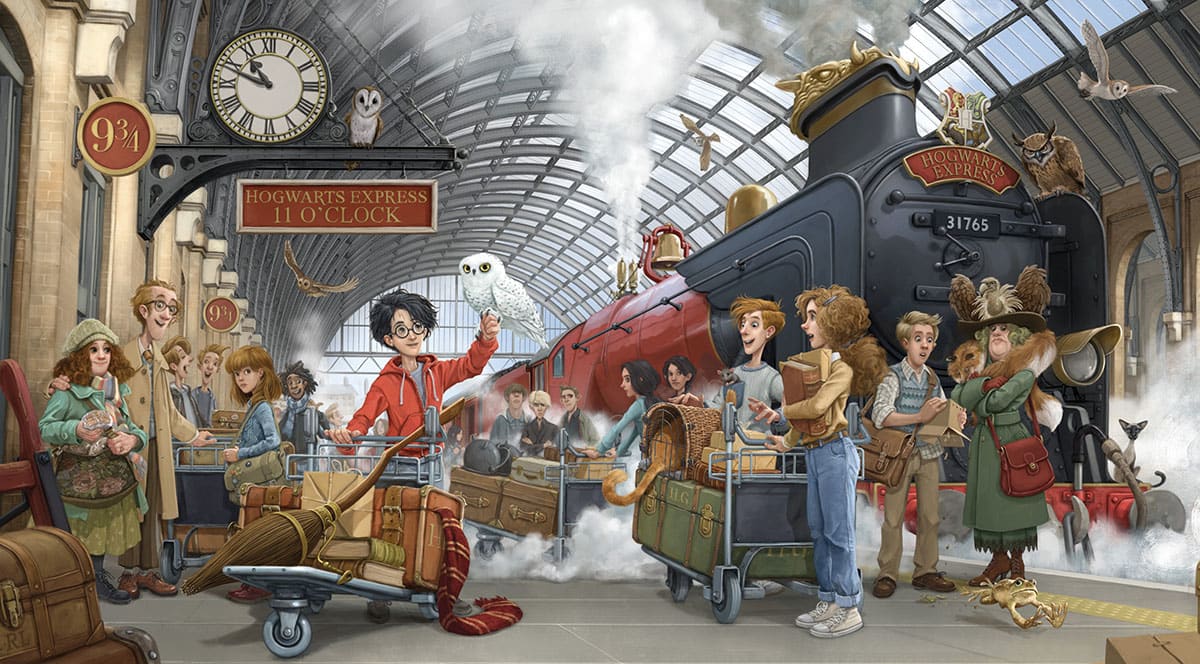 The Hogwarts Express, a gleaming scarlet steam engine, was already there, clouds of steam billowing from it, through which the many Hogwarts students and parents on the platform

Jonny Duddle has been commissioned by Bloomsbury to create an image of the famous platform nine and three-quarters to promote the new Harry Potter Book Day. Making it the worldwide celebration of J. K. Rowling's Harry Potter stories.

The new cinematic illustration shows Harry, Hermione, Ron and the other Weasley children being seen off to school by Mr and Mrs Weasley, as described in Harry Potter and the Harry Potter and Prisoner of Azkaban. They’re on a crowded Platform 9 ¾, with the front of the Hogwarts Express visible in the background. The platform is crowded with students about to board the train. You may spot; Neville Longbottom and his grandmother Augusta, Draco Malfoy and his cronies Crabbe and Goyle, Cho Chang, Lee Jordan, Parvati and Padma Patil.

The passage from Prisoner of Azkaban:

Next moment, they had fallen sideways through the solid metal onto platform nine and three-quarters and looked up to see the Hogwarts Express, a scarlet steam engine, puffing smoke over a platform packed with witches and wizards seeing their children onto the train.

Percy and Ginny suddenly appeared behind Harry. They were panting, and had apparently taken the barrier at a run.

‘Ah, there’s Penelope!’ said Percy, smoothing his hair and going pink again. Ginny caught Harry’s eye and they both turned away to hide their laughter as Percy strode over to a girl with long, curly hair, walking with his chest thrown out so that she couldn’t miss his shiny badge.

Once the remaining Weasleys and Hermione had joined them, Harry and Mr Weasley led the way to the end of the train, past packed compartments, to a carriage that looked quite empty. They loaded the trunks onto it, stowed Hedwig and Crookshanks in the luggage rack, then went back outside to say goodbye to Mr and Mrs Weasley.

Mrs Weasley kissed all her children, then Hermione, and finally, Harry. He was embarrassed, but really quite pleased, when she gave him an extra hug.

‘Do take care, won’t you, Harry?’ she said as she straightened up, her eyes oddly bright. Then she opened her enormous handbag and said, ‘I’ve made you all sandwiches. Here

Fans around the globe are able to celebrate the series with events, parties and other festivities. Each year Bloomsbury creates a downloadable event kit, packed with ideas and activities for holding events, in bookshops, schools, libraries, or at home with family and friends.

The Harry Potter Book Day rebrand is more acessible for children and schools, it is hoped that the new daytime slot will also allow more flexibility for bookshops and fans to hold events at any time of day or night on 12th October 2023

Jonny recreated covers for all seven of the Harry Potter Books in 2013 you can see them on his portfolio.

Jonny Duddle has been invited to take part in the Harry Potter 25th Anniversary celebrations kicking off with Harry Potter Book Night...

Welcome to part two of our Christmas gift guide, as we hurtle toward the big day there's just enough time to grab a few last minute...