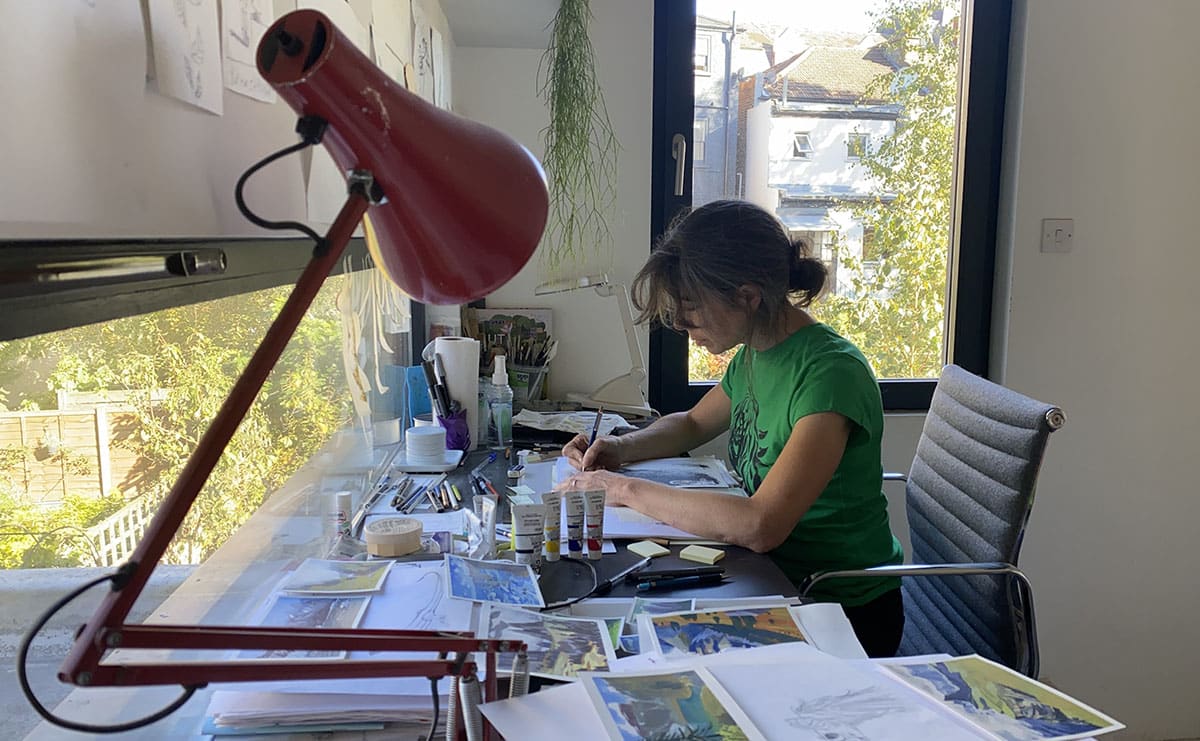 I’m not too precious about how an image is made, maybe I’ll get choosier with time. At the moment it’s more important to me that an illustration does the job it’s supposed to do, conveys the story point or emotion it needs to convey.

We have the great pleasure in introducing you to our new recruit - author and illustrator... Gaia Alessi.

Born in Italy and now living in London, Gaia brings a unique artistic vision to her work. We're very excited to learn more about her in this in-depth interview for our Artists Spotlight series.

We hear you are a fan of fairy tales and myths; do you have a favourite and is there one you would like to illustrate in its entirety?

Yes, I do like a good story! And I don’t just like myths and fairy tales but also ghost stories and science fiction. Myths, legends and fairy tales are especially attractive because even though they might have originated as the expression of a particular society’s values and norms, providing and codifying patterns of accepted behaviours, you could say that over time they have come to belong to everyone. They are there for anyone to retell and change for a new audience. I think this is what is really interesting about myths and folklore, there never seems to be a perfect or original form, but they are inherently plastic and variable, so that anyone and everyone can retell them.

As for what I would like to illustrate, ummmh … that’s a hard choice, there are too many good ones! At the moment I feel I’m leaning towards the legends from the Arctic regions or the First People mythology, there are some amazing tales. I’m particularly fond of the Eskimo legend of Sedna, the Mother of Sea Beasts; or maybe a story from North America about Coyote. But I certainly won’t say no to a yokai story like the Japanese Whale Ghost, the Bakekujiira, or the One-eyed Minogame Turtle, the Spirit Turtle that Wore a Straw Raincoat.

Tell us a little about the tools of your trade, how they differ between projects? And is there a medium which you haven't tried which you would like to?

Paper! Lots and lots of cheap paper! I never get things how I want them to be the first time, so I consume reams of recycled and responsibly sourced paper. I mainly use pencils and ink markers and, when I am not hard against a deadline, I also use gouache. I am comfortable mainly with opaque media. But I also work with the computer a lot, I like the flexibility and also my studio is more like a corridor so I rarely can make space for painting.

You could say that there isn’t an original as such for my illustrations, I work across media and then all is put together and finished off digitally. I’m not too precious about how an image is made, maybe I’ll get choosier with time. At the moment it’s more important to me that an illustration does the job it’s supposed to do, conveys the story point or emotion it needs to convey; the medium is secondary.

Having said that, oil painting is on my bucket list!

Did you have a favourite book from your childhood and do you think this inspired you to become an illustrator?

As a small child my favourite book was Filastrocche in cielo e in terra by Gianni Rodari. It is a collection of poems by Rodari illustrated by Bruno Munari... it certainly encouraged me to practice an unbridled imagination. As I grew up I also really enjoyed Roald Dahl’s books, especially James and the Giant Peach and The Fantastic Mr Fox. But I think that if I have to point to who or what pushed me towards illustration I think it might be the work of Richard Scarry and Hayao Miyazaki.

I love the crazy world of Richard Scarry, no matter how different the animals are they always seem to be able to get along together, which is not always the case outside of the pages of his books. He also consistently celebrates mishaps! How relaxing it is when all the characters of the stories you read are as incompetent as can be and don’t seem to fret about it. Very reassuring and satisfying for the reader!

The first animation I saw that Miyazaki worked on was Heidi, Girl of the Alps; I must have been between 8 and 10 years old and it was love at first view; the series was a big hit in Italy for children of my generation. Another big hit was Future Boy Conan, again I think many kids of my generation would have been glued to the TV for this show, it was and is a great show. I could probably still sing the tune of the opening credits for both of the shows, at least some of it!

And then of course ALL of the Studio Ghibli animated films - brilliant storytelling, breath-taking draftmanship.

We love sharing book recommendations, what do you have on your current reading pile?

My daughter and I have just finished Egg Marks The Spot by Amy Timberlake and we are in the middle of Thisby Thestoop and the Wretched Scrattle  by Zac Gorman. We wholeheartedly recommend both.

And I would recommend The Left Hand of Darkness by Ursula K. LeGuin. Even if you are not a fan of science fiction this is a fantastic book, unputdownable!

Do you have any favourite artists or illustrators who you are a particular fan of?

By training I originally was an installation artist, so I love anything immersive, like The Coral Reef  by Mike Nelson, or Haus Ur by Gregor Schneider or Kunsthalle Bern by Michael Asher. Also, I really wish I could have chanced upon some performance or other ephemeral artwork as it happened, like being in downtown Manhattan in winter 1983 at the right time to chance upon David Hammons’ Bliz-aard Ball Sale, or being a witness to any of Adrian Piper’s street performances in the Catalysis series or have had the opportunity to participate to even just one of her Funk Lessons, it would have been amazing, they’re all paradigm shifting works.

Painters I particularly like are those that use rich and unusual colour palettes and whose compositions are always balancing between representation and abstraction, painters that seem to ask how much can I leave out of this painting and still keep you gaze engaged? Today I’m thinking of the likes of Emily Carr, Fairfield Porter, Helene Schjerfbeck or Felix Vallotton but there many more that like to dance this dance.

The same applies to illustrators like Gustaf Tenggren, Mary Blair, Matthew Forsythe, Ping Zhu, Isabelle Arsenault, Molly Mendoza or Elle Michalka. But if you ask me again tomorrow, I would choose a completely different set, that’s the beauty of art and illustration there is so much good stuff out there!

Do you have any collections?

I have an unusually large number of plastic kaiju toys! I’m not sure it would class as a collection as it is really quite limited even if it’s too big for my small apartment (they are mostly stored in boxes under my bed). They come from Japan and the west coast of the USA. They are crazy and colourful and absolutely stunning but I stopped buying them about ten years ago when I couldn’t justify the environmental costs of such a whim. I still love each and every one of them and still keep an eye on all the independent toy makers that are still out there making weird and wonderful things. Their outlandishness brings me joy.

If you could have a studio anywhere in the world where would that be?

Would it be possible to have a studio a bit like Howl’s Moving Castle, please? Or if not that, I can settle just for the door that opens on four different places! Then I could still live in my home, which I quite like, but perhaps then have a studio in Juneau, Alaska or somewhere in the Tongass National Forest; a studio in Torres Del Paine, with a view of Cerro Torre; one with a view of the Grandes Jorasses; one in Yakushima Island and one in the forest of Fontainebleau possibly near the Massif des Trois Pignons or Le Diplodocus.

Do you have any valuable advice you were given when training which we could pass on to new graduates?

I didn’t formally train as an illustrator, so I’m not sure I can impart any qualified advice, all I have learned from my experience so far is that there are no shortcuts, you have to be persistent and doggedly so. If I were to focus on just one thing I’d say invest in developing fluency, being it linework, blocking shapes for characters, applying colour, figuring out how to light scenes. Break it down and work in small manageable steps. You have to become comfortable with spending regular time in your ‘ugly zone’ because that is where you learn the most, it’s your search space.

I’m not a believer of inspiration; ‘what inspires you?’ is a question that always stumps me. However, taking care of fluency has always paid off, because once you have built it (and keep tending to it) you can call upon it every morning at 9 am when you start work. It’s as powerful as a lever. Fluency is what turns effort into instinct.

Thanks to Gaia for answering our questions. You can see more of her work on her portfolio HERE.

If you'd like to work with Gaia on a new project, please email us at: info@arenaillustration.com

We are pleased to introduce our newest Arena illustrator Natalie Smillie and are so excited to be working with her...

Aleksei Bitskoff: Beyond the Odyssey

This month sees the launch Maz Evan's third raucous adventure Beyond the Odyssey with another epic cover illustrated by our very own...

Welcome to this year's Spring Portfolio showcasing some of the most talented visual artists working in Children's publishing today....